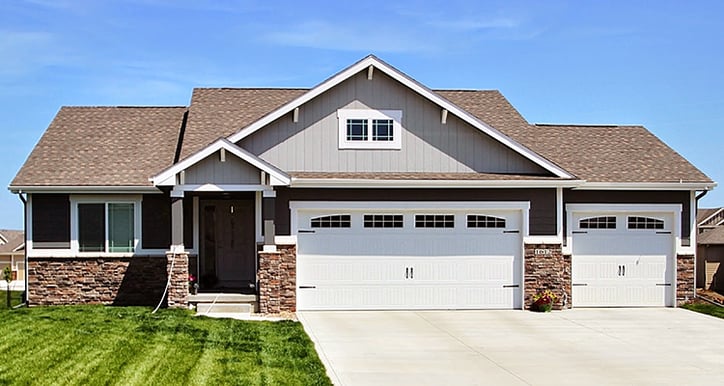 From the earliest chariot racers to today’s modern luxury collectors, it’s been vital to have a safe and secure place to store your vehicles. Whether your garage is attached, detached, or underground, your choice of garage door depends on lots of factors—including which side of the Atlantic you’re on.

Garage Doors: From Carriages to Camaros

Carriage houses were the predecessors to today’s garages: secure, separate buildings to safely store first horse-drawn and then motorized vehicles. Victorian-era carriage houses typically had double bi-parting doors hung on strap hinges that opened outward. To keep the doors from sagging on the ends over time, craftsmen incorporated Z and X bracing into the designs. As the automobile caught on, more and more homes built detached garages for their vehicles (the Sears catalog began offering mail-order garage kits in 1908).

Doors on early garages were generally similar to the traditional carriage houses: double doors on strap hinges opening outward. This simple design had significant drawbacks. Snow or other accumulations outside the doors made it difficult to open them in a variety of weather conditions, and they deteriorated quickly with daily use (frequently coming off their hinges). Doors that slid to the side were more durable and easier to operate but required significant space and had similar limitations in snowy or icy conditions.

Once new homes began to incorporate attached garages into their designs, the doors opened for new designs and technologies. As early as 1902, American manufacturers began selling a “float over door” for home and commercial garages. Catalogues boasted that these sectional doors could be operated “with one hand without any undue exertion” using a network of chains, hoists, counterweights, and pulleys. With the invention of the electric garage door opener in 1926, operation got even easier.

In 1936, one of the first one-piece overhead type garage doors was invented, using the first T-iron pivot hardware. Although early doors were mainly constructed of wood, galvanized steel doors insulated with polystyrene foam became popular in the 1970s, and fiberglass, composites, and vinyl-covered aluminum are most common today.

The “up-and-over” garage door remains one of the most popular models in European homes. These doors are made of one single panel, secured by a sturdy steel frame, that swings up in an arc. The lift mechanism, which employs extension springs, is located on each side of the door.

This simple type of door is very popular because it is quick and easy to install. In the U.S. and Canada, however, it has fallen out of widespread use for the same reason that doomed the original swing-out carriage house doors: winter. Snow and ice can impede the clearance arc and halt the door’s operation. Because of the milder climates in most of Europe, this isn’t usually a concern, and this economical door model remains widely used.

Many traditional and historic buildings have original or refurbished rolling or side-sliding doors, in keeping with their traditional aesthetic. Because of safety features and regulations related to garage door operation, slightly higher labor costs, and other Europe-specific considerations, an installed sectional garage door generally costs about twice as much in Europe as it does in North America.

Most modern residential garage doors in North America are composed of sectional panels, ranging from 18 to 24 inches each, rather than the single-panel style. These hinged panels glide on tracks, opening and closing using a motorized lift mechanism. They seal tightly to keep out the elements and lock for security.

In addition to being functional, secure, and energy-efficient, garage doors in the U.S. can be contemporary design features in your new home. Options like mirrored or partially-opaque luminous glass garage doors offer an even higher level of style while continuing to provide quiet, reliable ease of operation. New cell phone modules can allow you to open, close, and lock your garage door anytime from anywhere. Hard wiring for electrical safety devices (such as photo eyes) is being replaced by wireless technology. Whatever your style or security requirements, there’s a modern garage door to fit your needs.

Contact WD Door for garage door service in Des Moines and the surrounding areas or to talk about what door options are best for your home or business. To schedule an appointment, contact us today!

WD Door is a family and employee-owned overhead door and operator company with over 25 years experience in both residential and commercial fields. We work closely with both our customers and manufacturers to ensure high quality overhead door products and customer service.